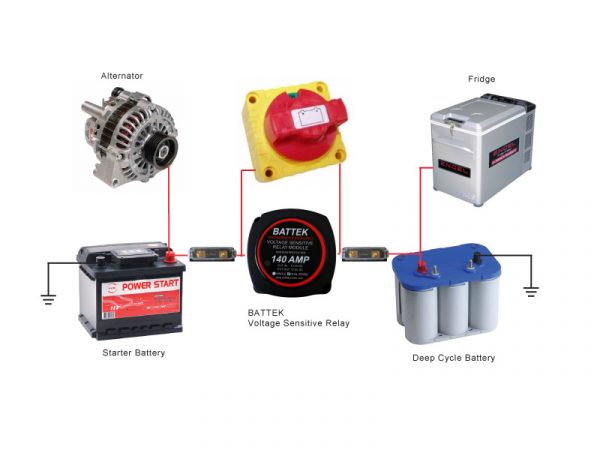 The beauty of this wiring arrangement is to concentrate first on charging of the primary battery, which is usually the engine starting or cranking battery, and only provide charging current to the secondary or house battery when the primary battery has been fully re-charged. In this way the system assures that the engine starting battery will always be kept at a high charge level, and charging of the house battery will never divert current needed for the starting battery.

To prevent this hysteresis is implemented in the control loop of the VSR so that the cut-in threshold and the cut-off threshold are separated by a margin of appropriate voltage. However, if the secondary battery is too large and the charging current source too small, the system will still oscillate or chatter, in spite of the hysteresis in the control loop. This can occur if the secondary battery is very large and the charging current is marginal. 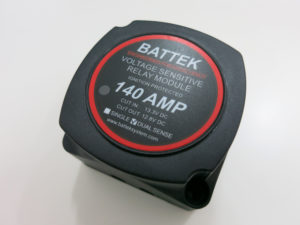 […] We’ve already done a few things to this space since moving in a little over a year ago including painting the walls white, replacing the range, switching out the light fixture, and adding under/over cabinet lighting. […]

Great Article ! I’d like to convert the two 4-ft single linear T-12 fixtures in my kitchen to LED lights. These are 40W bulbs but I’ve measured 45+ watts probably due to inefficient ballasts.

Both Dual Battery and LED System save battery power and allow the system to run more efficiently and longer.

Why would you need a Wireless Battery Monitor for your Trailer

Battery management is very important for campers, especially if campers solely use battery for refrigeration, lighting, and most important, to start the car again after camping. At the same time, campers also want the system Read more…

A van with solar power is awesome. It means you can live completely off the grid with lights, a fridge, phones and computers while no need to worrying about electric bills or power outages. However, Read more…

This website uses cookies to improve your experience while you navigate through the website. Out of these, the cookies that are categorized as necessary are stored on your browser as they are essential for the working of basic functionalities of the website. We also use third-party cookies that help us analyze and understand how you use this website. These cookies will be stored in your browser only with your consent. You also have the option to opt-out of these cookies. But opting out of some of these cookies may affect your browsing experience.
Necessary Always Enabled
Necessary cookies are absolutely essential for the website to function properly. This category only includes cookies that ensures basic functionalities and security features of the website. These cookies do not store any personal information.
Non-necessary
Any cookies that may not be particularly necessary for the website to function and is used specifically to collect user personal data via analytics, ads, other embedded contents are termed as non-necessary cookies. It is mandatory to procure user consent prior to running these cookies on your website.
SAVE & ACCEPT